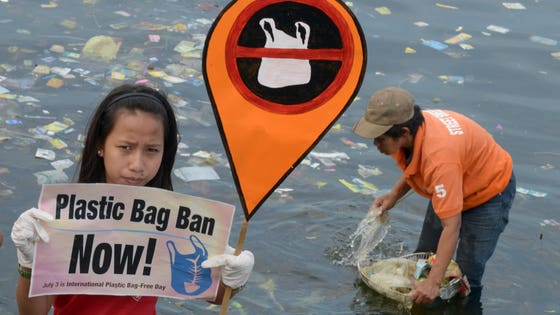 You’ve seen the pictures of massed plastic floating in the ocean. Of dead whales that choked on tons of polyethylene bags they swallowed. Of landfills clogged with soda bottles, dry-cleaning wrapping and food containers. Every piece of such dismaying litter, derived from processed petroleum, was fashioned for humanity’s convenience, and has ended up despoiling the environment, too.

The polluting proliferation of plastic is a powerful problem, with global production of the waste totaling more than 300 million tons annually. Worse, the material appears to have near-eternal life, with estimates ranging from hundreds to thousands of years before it breaks down.

But what if you could break down polluting plastic now, and re-use it? Yes, for years residents worldwide dutifully place their used plastic in recycling bins. Trouble is, a lot of the malignant material ends up in landfills anyway, where it contaminates groundwater. Colored plastic bottles, for instance, are hard to re-use, because their dye doesn’t come out. And forget about containers coated with food residue and other gunk. So your milk jug is refashioned into a pipe, but your sticky yogurt carton goes into the town dump.

There’s hope, though. Science, which gave us the blessing and curse of plastics, also may give us the solution to their pollution. A number of biotech firms are working on ways to degrade plastic into more useable forms, brushing aside obstacles like food residue and coloring dye, and making the transformational more cheaply.

Most promising is a startup called Carbios, which employs enzymes to break down widely used PET (that’s polyethylene terephthalate) plastic and more easily recycle it into bottles and all manner of other things. What’s more, the material can be turned around many times, as opposed to traditional recycling where one cycle is the limit. Giant corporations with big plastic presences—PepsiCo, Nestlé Waters and Suntory Beverage& Food—have invested capital and lent expertise to Carbios.

This is a case of capitalism to the rescue. Along with solving a blight, Carbios has the promise of being a great investment.

The company’s goal, says Carbios Deputy CEO Martin Stephan, is to increase the level of recycling and also to lower the need to create new plastic from oil. Carbios’ process, he says, “will be the same cost as petrochemicals.” Plus, the enzyme recycling treatment consumes less energy than creating virgin plastic, he adds.

The firm, based in France, seeks to license its process to large companies that rely on plastics. It has just broken ground for a demonstration plant near Lyon. “We need to develop the end of life of plastics,” says Stephan, a chemical industry veteran (DuPont, Elf/Total), who joined Carbios in 2017.

The company was founded in 2011 and went public two years later. Like a lot of biotech startups that are in the midst of developing what they hope are breakthrough products, Carbios isn’t profitable. Still, even though it hasn’t yet reached the stage where it’s lining up huge corporate customers, the firm has seen revenue rising and losses narrowing.

The EuroNext-listed stock is down by about a third from its IPO price, although it has been in a trading band of around 8 euros for the past three years. Stephan says he’d like to see it on a U.S. exchange at some point. “Everything is going as planned,” reads a research report on Carbios from Bryan, Garnier, a London-based investment bank, which figures that 15.5 euros is a fair value for the stock.

Among Carbios’ competitors is BioCellation, headquartered in Silicon Valley: It has a technique that shreds then liquifies plastic. Other companies working on the problem are Canada’s Loop Industries, Italy’s Garbo and Holland’s Ioniqa. Their methods differ. In Japan three years ago, scientists pioneered a method where bacteria eat the substance. But whatever the approach, the need is clear. An estimated 8.3 billion metric tons of plastic have been produced since the 1950s, and just 9% was recycled.

Whoever can commercialize a better way of repurposing the vast torrent of plastic will be doing a service to the environment—and to the process’ investors.

Blue Whales’ Migrations Depend on Their Memories