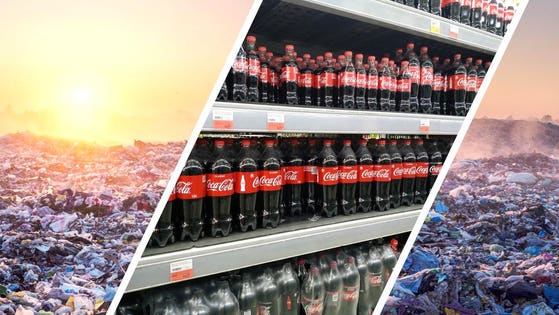 A recent audit on plastic trash around the world concluded that Coca-Cola was the largest plastic polluter.

The audit, conducted by Break Free From Plastic, consisted of 84 cleanup events across 50 countries and six continents. In total, 72,000 volunteers combed through beaches, city streets, waterways and their neighborhoods picking up pieces of plastic.

The organization’s volunteers collected a total of over 475,000 pieces of plastic waste around the world. Of the plastic collected, the No. 1 brand was from Coca-Cola, with 11,732 items collected. As you can see from the figure below, the second was Nestle and the third PepsiCo.

Coca-Cola responded to questions from The Intercept with the following: “Anytime our packaging ends up in our oceans—or anywhere that it doesn’t belong—is unacceptable to us. In partnership with others, we are working to address this critical global issue, both to help turn off the tap in terms of plastic waste entering our oceans and to help clean up the existing pollution.”

However, the breakdown looks quite different if you focus specifically on the United States. In the U.S., the top polluting plastic brands were Nestle, Solo Cup Company and Starbucks coming in third.

While there are ongoing efforts to increase recycling rates, global studies have found that more than a million plastic bottles are bought per minute and 91% of them are not recycled.

On top of that, the estimate is that next year over half a trillion plastic bottles will be sold and an estimated 455 billion of them won’t be recycled.

These bottles that aren’t recycled end up in landfills, are burned, or make their way through waterways and eventually to the ocean.

The report highlights the need to tackle the growing plastic problem with three different strategies:

While companies like Coca-Cola have made some effort in diminishing the plastic pollution problem they are part of, most believe they aren’t doing enough with what they have.

There is no perfect solution and as long as plastic is an effective and inexpensive source material, political and environmental pressure is the primary mechanism by which they will be encouraged to change.