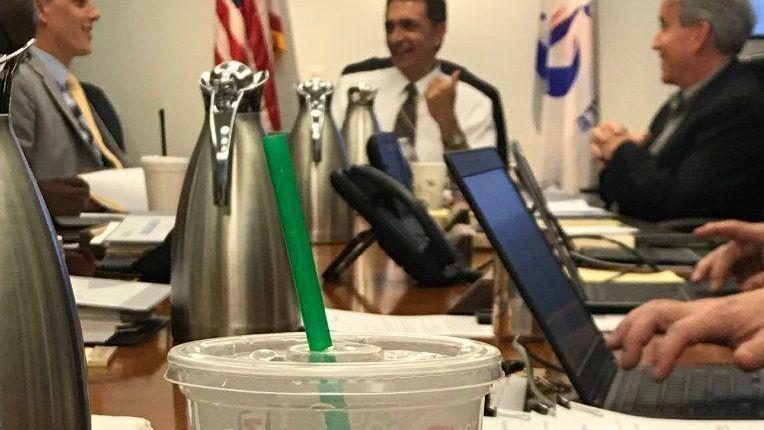 For years, the plastic straw seemed just a harmless, colorful aid for sipping your soda. Now, it’s an “environmental blight.”

Fort Lauderdale will join a growing number of major cities and commercial chains outlawing the plastic straw, declaring it a threat to the oceans, beaches and wildlife. City commissioners voted 4-1 Tuesday night on a law prohibiting the sale or distribution of plastic straws in any commercial establishment, city facility or at any special event that pulled a city permit. A final vote is expected in two weeks.

The law still allows a resident to sip through plastic straws in the privacy of his or her own home.

Straw sippers won’t be expected to quit cold turkey. For the first six months, the city will educate the public, preparing them to part with the plastic. For the following six months, a customer who just can’t consume a drink without one can get one upon request. But a year from now, the full ban would be in effect. Anyone addicted to straw use would have to tote one to a restaurant.

Lest someone be unclear what a straw is, the city law describes that it is “for the purpose of transferring a beverage from its container to the mouth of the drinker by suction.”

The sole vote against the new law came from Commissioner Robert McKinzie, who said restaurants already have taken cues from the public, and offer paper straws or require customers to ask.

“And I hate putting my lips on the glass,” he complained.

McKinzie called the law a waste of time and of enforcement resources. He noted that a McDonald’s customer in St. Petersburg last week attacked a worker when he sought a straw and was told the city outlawed them and that he’d have to request one.

“He should bring his own straw,” Commissioner Steve Glassman said.

“Do you really want to go on record as being against?” Mayor Dean Trantalis asked.

“Oh yes I do,” McKinzie responded. “I’m serious about this.”

The law will help “reduce litter and pollutants on the lands and in the surrounding waters of the city in order to continue to protect the wildlife,” a city memo says.

City officials would rather see sippers using environmentally friendly straws that disintegrate, like those made from seaweed, paper or hay. For those turned off by that, reusable straws made of steel or glass also are preferable to plastic, city officials said.

The Companies Whose Products Result in the Most Plastic Trash – TheStreet.com

Why are dolphins returning to Venice? Why are wild animals returning to towns? Why are sea turtles able to hatch in Brazil? Why is the air drastically cleaner? We have a clear example of what the world looks like with less people. How can it be denied that human population size is relevant?