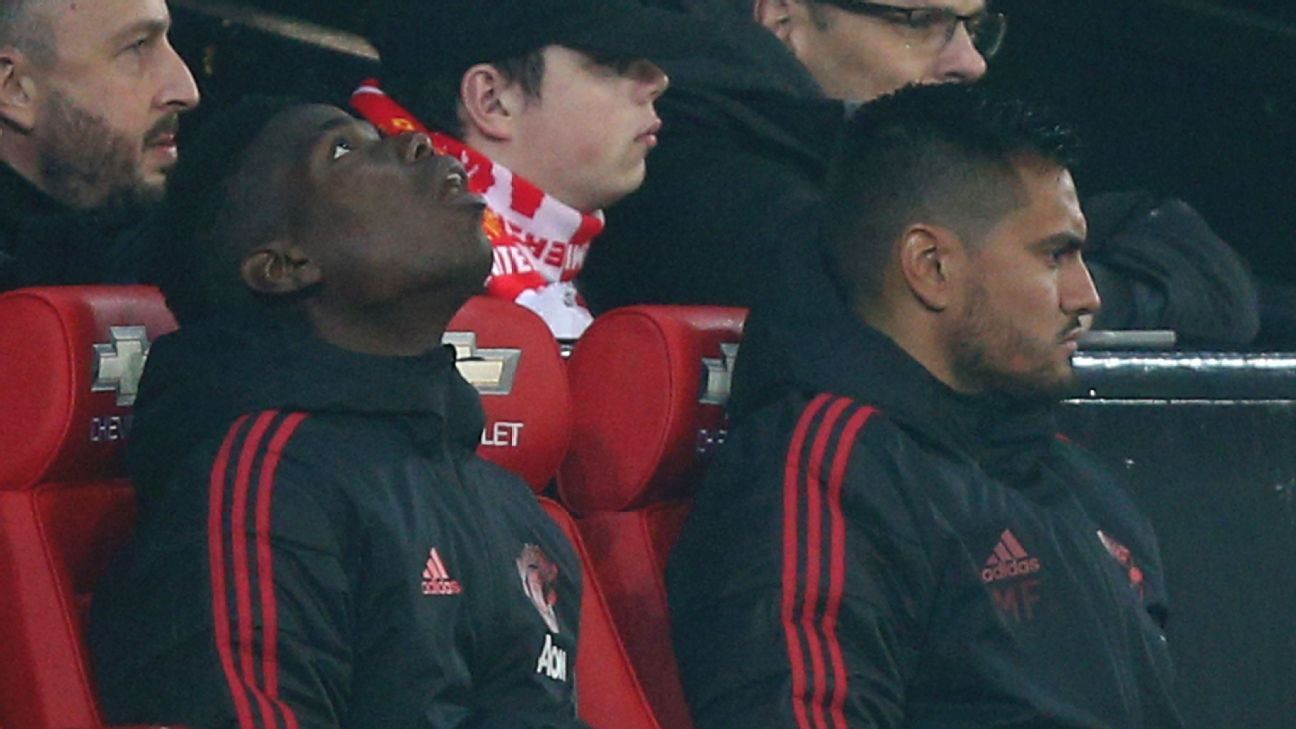 The transfer window for Europe’s biggest clubs might be closed, but they are still working tirelessly behind the scenes to line up the arrivals of their next stars. Transfer Talk has been scouring the world’s media to see who could be heading to your club when Jan. 1 arrives.

It has been talked about for a while, but the back page of Monday’s Tuttosport suggests Juventus are ready to make their move for Paul Pogba after he was left out of the Manchester United team once again on Sunday.

Liverpool versus Man United is one of the flagship contests of the Premier League season but Pogba not only started the game on the bench, he remained there throughout despite his side desperately needing a goal during the 3-1 defeat.

The World Cup winner has been a substitute for three of the last four matches, despite becoming the world’s most expensive player when Jose Mourinho signed him for £89 million in 2016. And Tuttosport claim Juventus are now lying in wait, ready to make their move for the 25-year-old, as his relationship with Mourinho continues to deteriorate.

12.30 GMT: The future of Adrien Rabiot at PSG is still up in the air but his coach has provided some kind of an update.

Tuchel admits that Adrien Rabiot could leave PSG in January if he has not signed a contract extension by then & confirms that a defensive midfielder is still wanted.

12.05 GMT: Any Man United fans getting excited by the prospect of Eder Miliato arriving might get even more excited with ANOTHER defensive signing as Turkish outlet Aksam claim United want Galatasaray’s Ozan Kabak.

The 18-year-old is worth around €20m (£17.9m) after some impressive performances in the Champions League.

11.46 GMT: Steven Gerrard believes Ovie Ejaria has made the wrong decision in ending his Rangers loan spell early and returning to Liverpool.

Ejaria joined Rangers on a season-long loan in June and made 28 appearances for the Scottish side, but returned to Liverpool on Saturday after feeling unsettled in Glasgow. Gerrard held talks with the 21-year-old on Friday after he was left out of the Rangers squad that travelled to Austria for Thursday’s Europa League encounter with Rapid Vienna.

“Look he’s a Liverpool player so I first and foremost have to respect the kid and the privacy,” Rangers boss Gerrard said on Sunday. “I’d like to thank Liverpool for the opportunity to have him here for half the season. Am I disappointed he’s gone? Yes. Do I think it’s the right decision? No, because I think he had an incredible opportunity here.”

10.20 GMT: Watching his Manchester United defenders against Liverpool might have tipped Jose Mourinho over the edge as he has personally got involved in the club’s transfer business to try and land Porto defender Eder Militao, according to UOL.

It will be an ongoing battle with the man who holds the purse strings, executive vice-chairman Ed Woodward, but Militao is evidently high on the list.

9.52 GMT: AS report that Barcelona have received an offer of €65m from China to sign Malcom.

The Brazilian winger hasn’t exactly set the world alight at Camp Nou since arriving in the summer, so the club may be considering this one pretty seriously.

Lainez was linked with Lyon earlier this week and has indicated previously that a move to Europe is in his plans for the future.

09.13 GMT: Chelsea midfielder N’Golo Kante is such a nice man you can always trust what he says. So if he says that PSG made contact to try and sign him last summer, you can believe it.

He told RMC: “There wasn’t particularly a desire to go elsewhere … There was some interest [from PSG]. But after talking to Chelsea, I realised the most important thing was to feel good where you are, and I feel good at Chelsea, and that it was good for me to stay at Chelsea.”

08.55 GMT: According to L’Equipe, forgotten PSG man Jese Rodriguez (he of Stoke loan fame) has been offered to Real Valladolid after Real Betis passed on the opportunity to sign him.

08.30 GMT: Pepe left Besiktas club staff a cash tip as a parting gesture after agreeing to have his contract with the Turkish club terminated, sources have told ESPN FC.

The former Real Madrid defender’s deal was set to run until June 2019 but he has left with the Istanbul-based club in the process of slashing their wage bill to reduce expenses amid struggles with growing debts.

Reports in Spain over the weekend had claimed Pepe had covered the wages of several members of staff who had not been paid. However, sources told ESPN FC that, while the Portugal international did not make up for unpaid salaries, he did leave an envelope with a large tip as a gesture to the maintenance, kit and cooking staff at Besiktas.

Pepe is 36 in February but, with his experience and status as a free agent, there could be plenty of clubs interested in taking the defender on a short-term deal.

Manchester City are not short of talented midfielders but they are keen to add yet another to their ranks in the form of Napoli’s Allan, according to Calcio Napoli 24.

The 27-year-old, who made his full Brazil debut last month, is said to be attracting the interest of City, Bayern Munich and Monaco.

Allan has become an integral part of the Napoli side since joining from Udinese in 2015, making 153 outings in all competitions.

Allan signed a new deal which will keep him at the club until 2023 in March and new boss Carlo Ancelotti has made it clear he wants to keep the Brazilian at the club despite the interest.

Rafa Benitez wants to sign a few players in January and one of those already frequents St James’ Park on a regular basis, with the Magpies boss keen to make Salomon Rondon’s switch permanent, reports the Independent.

It will hardly come as a surprise considering Rondon has found the net four times in his last six games, despite Newcastle struggling to create chances this season.

Benitez attempted to sign the 29-year-old permanently in the summer for £16.5 million but the club’s board refused to sanction the move.

That saw a temporary switch agreed, with Dwight Gayle going in the other direction, but it is understood the Magpies will make another approach either in January or at the end of the season, with the striker’s contract due to expire in 2020.

Football Whispers’ transfer algorithm gives the likelihood of rumours happening a score out of five.

Barcelona are said to have made a formal loan offer to Chelsea for Andreas Christensen. It is feared Samuel Umtiti will require surgery on a knee injury and Barcelona have lined up the 20-year-old Dane as his temporary replacement.

Arsenal are said to have bid £29m for Roma winger Cengiz Under but it is understood to have been rejected. Tottenham are among a host of clubs keen on the 21-year-old Turkey international.

Chelsea are ready to pay Borussia Dortmund £60m for Christian Pulisic, if reports are to be believed. At just 20, “Captain America” is one of the most sought-after talents in world football and it is claimed he has told Dortmund he wants to sign for the Blues in January.

West Ham are ready to make a loan bid for Manchester United midfielder Andreas Pereira. The 22-year-old started against Valencia last week but has been limited to just six outings in all competitions this season.

Everton have joined Manchester City and Borussia Monchengladbach in trying to sign West Ham defender Reece Oxford. The 20-year-old has been limited to just two cup outings for the Hammers this season but his performances on loan at Gladbach last season really caught the eye.

Costing the Earth – Iron Curtain Turns Green: The Iron Curtain was an accidental wildlife haven. Thirty years since the fall of the Berlin Wall, Tom Heap walks the borderlands to see how nature has continued to thrive.