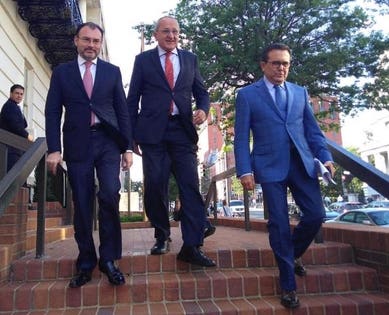 The much touted “handshake” deal with Mexico slated for Thursday will be a nice tailwind for Mexico investors but is hardly the end of the line for NAFTA trade talks, says Marcelo Carvalho, an economist with BNP Paribas.

Recent talks between the U.S. and Mexico, excluding Canada, have focused only on rules of origin for the auto sector. “We continue to hold the view that a final deal will take longer than suggested,” Carvalho says. “No agreements have been reached on any of the controversial issues. Canada’s absence from recent talks makes things (even more) difficult.”

A NAFTA deal is dependent on all three members. The worst-case scenario remains the Trump administration leaving NAFTA in favor of a separate bilateral agreements between the U.S. and Mexico, the U.S. and Canada.

The Trump administration is planning on making a Mexican trade announcement later today, likely sending Mexican stock and bond prices higher. It also potentially clears the way for Canada to rejoin negotiations, according to sources quoted in Politico earlier this week. Officials are expected to announce that the U.S. and Mexico, which have been meeting together for the last several weeks, have made enough progress on various two-way issues to make a “handshake” deal. MSCI Mexico (EWW) should look good this morning. It settled 2.03% higher yesterday.

Today’s announcement is expected to include progress with Canada too, giving Canada securities a lift if the market thinks talks are heading in the right direction.

Meanwhile in Mexico, retail sales are up around 2% over the previous month, helped by strong remittances from Mexicans living here, and low unemployment in both Mexico and the United States. There has also been a surge of consumer confidence in Mexico with the election of anticorruption, left-of-center nationalist president Andrés Manuel López Obrador on July 1. The consensus is for Mexico’s economy to continue apace.

Obrador will inherit a good economy and a strong neighbor for Made in Mexico goods.

Besides today’s NAFTA announcement, investors will be waiting for first-half August inflation data today. BNP Paribas analysts expect inflation to be up to 0.30%, nearly double that of July due mainly to rising food costs and gasoline prices, which are no longer subsidized. Year-on-year core inflation is expected to be around 4.7%. Inflation is expected to fall to 3% next year, opening the central bank up to rate cuts at a time when the U.S. is on a rate-hiking spree. This is good for Mexico as lower rates there could help growth at a time when a strong dollar is undercutting most emerging markets.

NAFTA or no NAFTA, Mexican GDP is expected to be around 1.5% in 2018, hardly anything to write home about. There are risks to the upside, however, largely thanks to a stronger U.S. economy leading to more remittances. Mexicans send more money to Mexico from the U.S. than oil firm Pemex has reported in net income over the years. It is one of Mexico’s top two sources of foreign fund flows.

Trump’s global trade war has hurt Mexican-based manufacturers. Manufacturing exports are down nearly 10% this year as of the second quarter. Carvalho of BNP Paribas thinks the main reason for that is the substitution of imports in the U.S.