San Franciscans have had their last straw — plastic, anyway.

Last week, a city ordinance took effect banning the sale and distribution of plastic straws and other plastic dining items, forcing restaurants to turn to biodegradable alternatives such as paper, wood, wheat or bamboo.

It’s an adjustment that isn’t going down easily for some drinkers.

“Paper straws are mushy within fifteen minutes,” said Bay Area event planner Karen Zachary. Guests at her clients’ events won’t even take the paper straws when given the option, she said; instead they drink their beverage without one.

The new rule goes a step further than the statewide “straws upon request” law that bars dine-in restaurants from providing single-use plastic straws unless a customer asks for one. San Francisco’s ordinance also bans companies from automatically including single-use accessories — lids, condiment packages, utensils and napkins as well as straws — in dine-in, take-out or delivery orders.

“It’s definitely more expensive,” said Benny Han, owner of Black Sugar Boba in Tenderloin, which is currently using paper straws. He said customers have asked for multiple straws due to breakage. “We are still figuring out our best option.”

Even businesses that appreciate the ban’s higher purpose are feeling some pain.

“It’s a big jump in price,” said Andrew Barnett, owner of Linea Caffe in Mission. “But I feel that, for helping the environment, it is well worth the investment.”

San Francisco’s Board of Supervisors passed the ban in July 2018, and Debbie Raphael, director of the San Francisco Department of the Environment, noted that businesses were given a year to prepare.

“Time and time again, we have seen the marketplace respond to San Francisco policy,” she said. “When local government sends signals to the market, the market will adjust and adapt. We saw it with the styrofoam ban, the plastic bag ban, and we’re seeing it now with plastic straws.”

Advocates for the disabled community aren’t happy with the policy. Jessica Lehman, executive director at Senior and Disability Action, said that plastic straws are by far the best option for holding up in hot and cold drinks, bending, and not hurting the user if bitten down on.

Charles Sheehan, spokesman for the city’s environment department, said that people with disabilities or a medical need should be able to request a plastic straw and that the department will continue its outreach to restaurants to make sure they understand that. Linea Caffe, for example, has ordered plastic straws to make available for customers with disabilities.

Still, Lehman worries that most restaurants won’t make the effort to purchase extra plastic straws — not to mention that it may be difficult for those with language and speech barriers to make those requests in the first place.

For makers and distributors of non-plastic straws, the ban is a boon. A spokeswoman for HAY! Straws, a San Francisco company that makes wheat-based (albeit non-edible) straws, said restaurants were requesting deliveries in the days leading up to the ban. 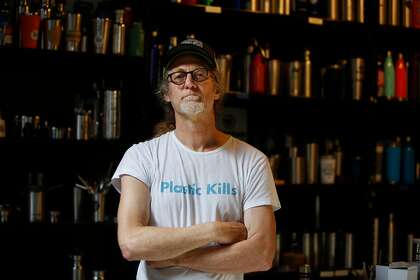 Steelys Drinkware, which is based in San Francisco’s Dogpatch neighborhood, has sold reusable straws for about eight years. “But as we’ve seen a lot of progress on the policy front, there has been a massive spike in sales,” said John Borg, the company’s founder.

Stainless steel straws also have started popping up in bubble tea stores. Identitea and Boba Guys sell the straws to their customers for $5, and each comes with its own straw cleaner. The hope is that customers will bring their straw with them when they buy their next boba drink.

Jimmy Lyons, founder of eco-friendly food packaging company Eco-pliant in San Francisco, said that restaurants like plastic because it is so cheap. But as alternative straw options become more widely used, costs could fall. Even in the past couple of years, new suppliers have entered the market with higher quality products and more affordable prices, Lyons said.

“There’s still a lot of innovation to do in the industry, especially in a society that has been so dependent on plastic,” he said.

But paper straws, a common alternative, are not to everyone’s liking. Some are strong enough to last for hours, some are flimsy and break apart easily, and some leave a paper aftertaste.

“That paper straw you now have to use will crumble before you even get to enjoy (your drink),” said Dominic Maxwell of San Francisco, who noted that when a drink costs $4 or $5, quality matters. “Then, you’re stuck … with the taste of mushy paper in your mouth.” 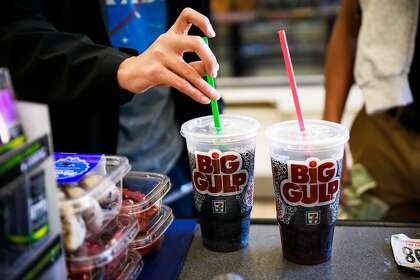 Some also dislike the legislation because they see it as a sign that San Francisco is too much of a nanny state — on top of plastic bags and styrofoam, the city has also banned facial recognition technology and the sale of e-cigarettes.

“It is without a question that the plastic straw ban is an over-regulation,” said San Francisco Republican Party acting chair Nicole Garay. “It is important to take care of the world around us (but) businesses should independently decide to avoid using plastic straws and find more sustainable alternatives to single-use plastics, rather than having the government force them.”

Jackie Nunez, program manager for the Plastic Pollution Coalition, views it as ironic that stores may serve drinks with paper straws inside plastic cups with plastic lids. Even so, she thinks it’s a good start.

“The beauty about the straw is that it is a gateway issue,” she said. “You can’t talk about straws without addressing the dangers of all single-use plastics.”

It started with just 14 wolves. Then, Yellowstone changed in ways we never predicted

Up to 100 vulture deaths prevented by rapid response to poisoning