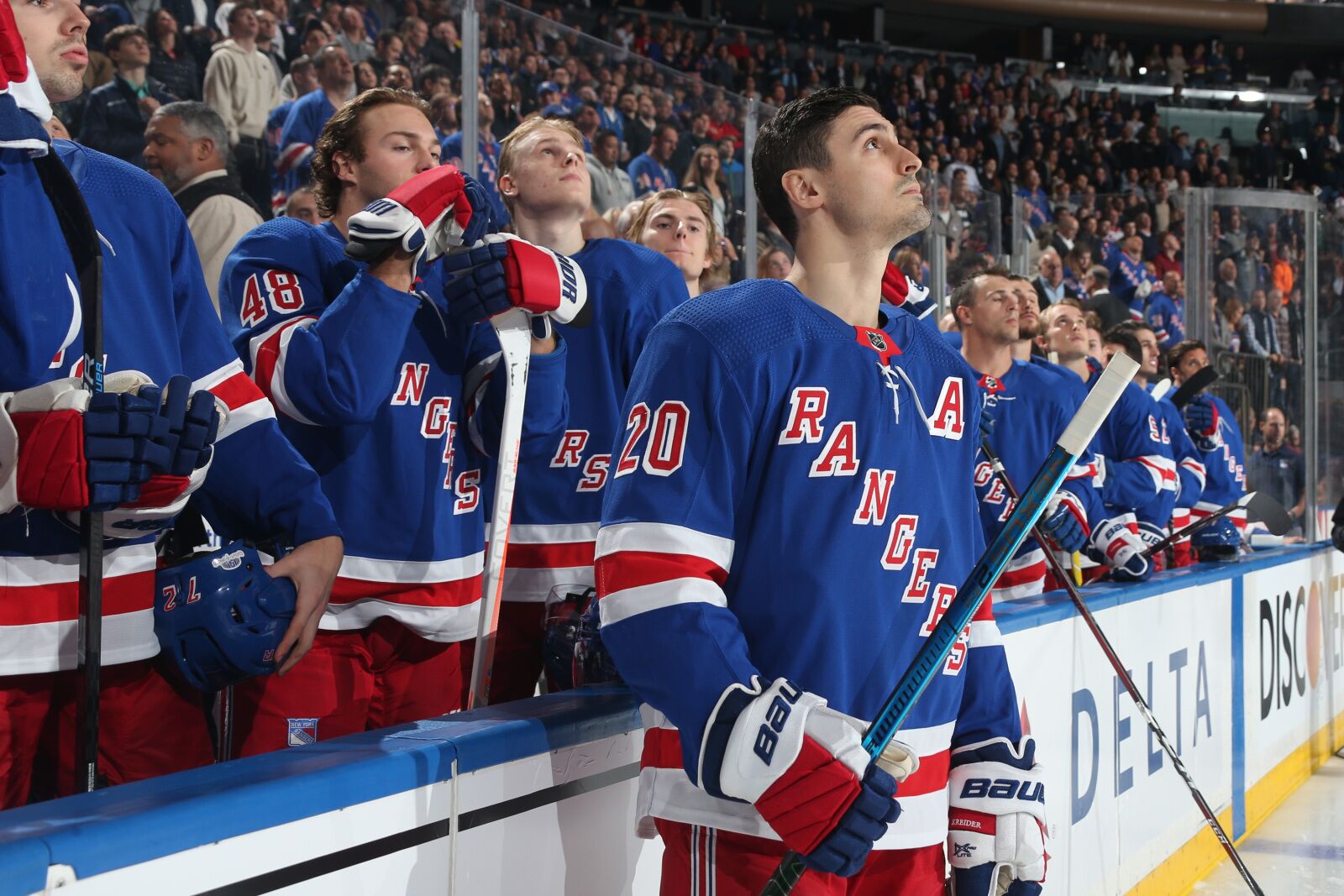 In New York sports lore, Reggie Jackson, while playing for the Yankees in 1977, is credited with the quote, “I’m the straw that stirs the drink”.  Seven years later, Sports Illustrated playfully put a young Darryl Strawberry on the magazine’s cover with “The Straw That Stirs The Mets” as the headline.  Now, the New York Rangers have a straw stirring their frozen drink, but it’s not who you would first expect.

Who makes the New York Rangers go? Who fuels the engine that powers the team on a nightly basis? Many would say it is Mika Zibanejad, others would argue it has very quickly become Artemi Panarin or Jacob Trouba, still others may even say it is Jesper Fast.

As we are now through the first twelve games of the season, it has become abundantly clear that the player who really makes the difference in the team’s performance game after game, night after night, is Chris Kreider.

Let’s jump ahead to the comments sections quickly.

WAIT, WHAT! Dude has two goals and four assists for a grand total of six points through those first twelve games, you’re nuts!

Nuts like a fox I say.  Stop valuing a player based on the points he puts up and pay attention. Do you really watch Rangers games, or do you just look up as soon as you hear the GOOAAAL song.  If you do watch, really watch, then you can’t miss the fact that Chris Kreider is the real difference maker on the Rangers team. As Kreider goes, so go the Rangers…for many reasons.

First off, Kreider is a beast. At 6’3″, 220 pounds he is just about the same size as Alex Ovechkin. When he turns on the speed, there are very few in the NHL who can match him stride for stride down the ice.  That is a pretty lethal and rare combination. That combination may not always turn into points for Kreider, but more often than not, it does turn into points for his line mates.

Perfect example is the Filip Chytil goal from Saturday’s game against the Nashville Predators. Sure it took a slick move from Chytil to toe drag and shoot, but none of that is possible without Kreider roaring down the center of the ice to make the breakout a two on one.  The one Nashville defender who was backing up had no choice but give Chytil some space because he had to account for Kreider.  The second Nashville defender had absolutely no chance of catching Kreider from behind.  The goal is Chytil’s, but Kreider was the catalyst.

That play was a microcosm of the entire game for Kreider, and his coach was quick to point it out.

“I’ll tell you right now, that might have been his best game of the year. The goal we get, the first goal, Chytil’s goal  he does a heck of a job with our transition defense they  sort out the initial rush, everybody gets back in the middle…Libor Hajek’s great stick, but Kreider makes a great read coming back into our end…we go the other, he blows by three Nashville guys and because of his net drive, Chytil is able to make that great play.  So he was all over the ice…I thought it was Chris Kreider’s best game of the year.”

On the other end of the spectrum, take a look at the debacle that was played against the Ottawa Senators last night.  Did you notice Chris Kreider on the ice?  He had a pretty quiet game.  Not saying he played a bad game, but the difference between Kreider being a dominant player on the ice or a pedestrian player is the difference between the Rangers beating a top team like Nashville or losing to a poor team like Ottawa.

He is the difference maker. When he is imposing his will, the team runs like a well tuned engine. When he is not, it seems like a few spark plugs have gone bad.

Kreider’s value to the Rangers goes much deeper than just his play on the ice.  If you watch that Chytil goal again, pay attention to Kreider’s reaction.  You can’t hear it, but you can see he lets out a scream of approval as Chytil skates by. Sure he is celebrating the goal, but you can also see that he is genuinely happy for the kid.  He wants Chytil to be successful, revels in it.  Seconds later Kreider joins the post goal celebration with an ear to ear grin and face wash for the young Czech.

Watch closely during games and you can also see Kreider in constant conversation with the young players on the bench. He’s teaching, he’s encouraging, he is taking these kids under his wing and advancing their development.  The value in that can not be overstated, and it should be factored on the decision to sign him to an extension sooner rather than later.

That extension would not only guarantee the Rangers a fierce top six forward but also the type veteran leader that is desperately needed for a team to advance in the brutal world of the NHL playoffs.  That is not to say Kreider needs to be made the next captain, but just his presence in the room would be incredibly valuable to this team once they do make the playoffs.

We have all seen the clip of Marty St. Louis firing-up the Rangers locker room before a playoff game in 2015.  There is Chris Kreider, sitting in the first locker by the door, big smile, loving every minute of it.  You don’t think having a guy that was witness to that has value to this team moving forward?

He is also they type of player that excels in the playoffs and his track record proves that point. He scored big playoff goals as a rookie, he’s been through several seven game series, and he’s been to a Cup Final. He knows what it takes, he’s been there, and there are very few on this team that can say that.

Add to the mix that Kreider speaks fluent Russian.  In case you haven’t noticed, the Rangers have a few Russian players on the roster that play important roles and they have at least two more on the way.  You have to think that Buchnevich loves playing on a line with Kreider.

From an opposing team perspective, Chris Kreider is a match-up nightmare.  With the Rangers rolling out Kreider on their second unit, it puts a tremendous amount of pressure on the opposing coaches to find a way to neutralize Panarin/Zibanejad on one shift and then Kreider/Chytil on the next.  It’s a one two punch that could mirror the success the Penguins had rolling out an Evegni Malkin line after a Sidney Crosby line.

Coaches are going to have to find a way to match defensive pairings against two very tough lines. You want to put your best skating defenseman out against Kreider or Panarin? Do you want to match-up your biggest defensive pair up against the size of Kreider and Chytil or the skill of Zibanejad/Panarin.  Same goes for matching up top lines.  Pick your poison.

This is the kind of line depth the Rangers have been lacking for several years now, and it is all because they still have Chris Kreider around.

The contract situation is well-known. Kreider’s is an unrestricted free-agent at the end of the year. He is going to need a bump from his current $4.63 million deal.  To do that, the Rangers must come to terms with the fact that Ryan Strome has no future with the team.  Rangers fans should be able to live with that. If Strome continues to play as well as he has so far this year, he should fetch a nice return at the trade deadline.  It should not be a tough decision.

The Rangers are oh so young.  They put a team of not yet or barley legal young men out on the ice every game night. They are growing and grooming the next generation of talent with the hope of bringing The Cup back to New York.  That process can’t be done without veteran leadership, and the one player the Rangers have right now that can best serve in that leadership role is Chris Kreider.

What team should we expect?